Governments in countries with a low level of digitalisation and unsatisfactory financial inclusion must recognise that an enabling policy framework and public investment are keys to the successful widespread adoption of digital-payment systems, the Economist Intelligence Unit (EIU) says.
Across the world, digital payments are now synonymous with mobile payments, with the rate of adoption directly linked to access to smartphones and telecoms networks.

Businesses worldwide have been affected by the slowdown in economic activity due to the Covid-19 induced lockdowns. However, the Covid-19 pandemic has forced economies across the world to modernise their payments systems in order to support commerce and allow a return to economic growth.

EIU’s latest report, ‘Going digital Payments in the post-Covid world’, revealed that: “A third distinct path has emerged, primarily in less-developed economies where the use of mobile phones has become widespread but few citizens have formal financial accounts,” EIU stated. 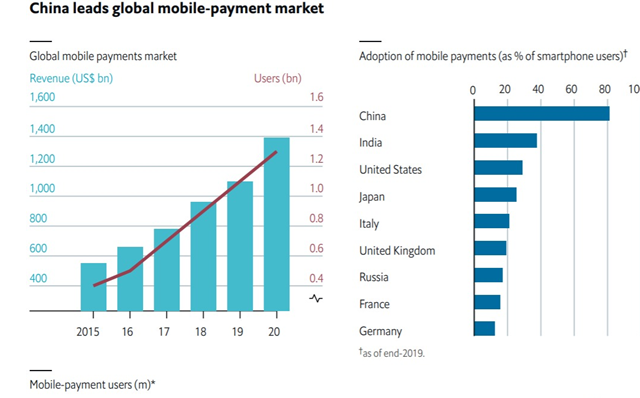 Kenya’s telecoms firm, Safaricom and the UK-based Vodafone created M-Pesa in 2007 to allow users to transfer funds domestically to friends and family using mobile-phone credits. The success of the system led to its extension to regular retail payments and to it being linked to users’ bank accounts.

The mobile-money revolution has since caught on in Nigeria, which has Africa’s largest unbanked population, according to EIU. However, in contrast with Kenya, the mobile-money industry in Nigeria is dominated by banks and technology firms, as telecoms operators cannot apply directly for mobile-money licences.

“Over the medium term, mobile-money operators will scale up their value-added financial services, such as interest-yielding deposits and insurance, supported by the growing number of people joining the ranks of the middle- and high-income groups.”

“The bigger players will shift focus to create platform-like structures, adding new verticals and creating a suite of products and services, such as ride-hailing, food delivery, and entertainment for their users.” In other words, they will evolve to become more like Asiastyle super apps, according to EIU.

On the other hand, EIU said regulators must adopt a proactive, multi-level approach to technological changes when formulating new standards, as well as closely monitoring any financial risks within payments systems – Harare

Clearing forex backlog on the auction with SDRs is unlikely to be a sustained solution: Report

‘Keeping register of beneficial owners by companies to unearth cartels’

Another close in the red for ZSE, auction backlog a worry

Lack of External Funding might result in Money Printing: CZI

THE VALUE OF SAFETY HEALTH AND ENVIRONMENTAL MANAGEMENT IN ALL INDUSTRIAL...

Any cookies that may not be particularly necessary for the website to function and is used specifically to collect user personal data via analytics, ads, other embedded contents are termed as non-necessary cookies. It is mandatory to procure user consent prior to running these cookies on your website.

MPC to put in place a term lending facility to assist...

ZIMRA beats 2020 collection target as it collected US$362 million in...