Zimbabwe recorded $166 million of foreign direct investment (FDI) inflows in 2021 against inflows of $194 million in 2020, according to the 2022 edition of the United Nations Conference on Trade and Development’s (UNCTAD) World Investment Report.

Experts attribute a lack of investment to a lack of investor confidence, largely emanating from the government’s policy inconsistencies. Also, the coronavirus pandemic made it difficult for already stressed investors to splash their money as the environment could not favor it.

Despite a 14% fall in FDI inflows, the government is committed to prioritizing the agriculture and mining sectors and has amended investment laws to encourage investment to develop both of these priority sectors.

FDI to one of Zimbabwe’s biggest trading partners, South Africa, increased to $40.88 billion from $3.06 billion in 2020. “The strong increase was due primarily to a large corporate reconfiguration in South Africa – a share exchange between Naspers and Prosus in the third quarter of 2021,” stated UNCTAD.

FDI to Southern Africa nearly tripled to $42 billion during the period under consideration.

Investment flows to Zambia, on the other hand, were negative at -$457 million, down sharply from -$173 million in 2020. The reduction was related to a $1.5 billion copper mine divestiture by Swiss firm Glencore to state-owned ZCCM Investments Holdings, according to UNCTAD. 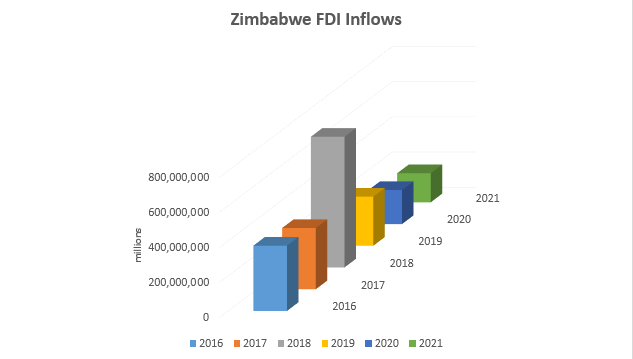 Meanwhile, for the second consecutive session equities trading at the Zimbabwe Stock Exchange (ZSE) maintained downward trend as the ZSE All Share Index closed 1.43% weaker to finish at 23,790.71 points on Wednesday.

From the rear of the chart clothing retailer Truworths topped the losers set after falling 8.23% to ZWL$2.20.

With regards to the value of traded stocks, Econet took the lead of the top 5 performers, flanked by FBC, Delta, Simbisa and Ecocash.

By ETimes The Reserve Bank of Zimbabwe (RBZ) raised the main interest rate for the umpteenth time this year...
Read more

RBZ to clear auction backlog month-end after missing May deadline

By ETimes The Bankers Association of Zimbabwe (BAZ) on Monday said it has received commitments from the apex bank...
Read more

This website uses cookies to improve your experience while you navigate through the website. Out of these cookies, the cookies that are categorized as necessary are stored on your browser as they are essential for the working of basic functionalities of the website. We also use third-party cookies that help us analyze and understand how you use this website. These cookies will be stored in your browser only with your consent. You also have the option to opt-out of these cookies. But opting out of some of these cookies may have an effect on your browsing experience.
Necessary Always Enabled
Necessary cookies are absolutely essential for the website to function properly. This category only includes cookies that ensures basic functionalities and security features of the website. These cookies do not store any personal information.
Non-necessary
Any cookies that may not be particularly necessary for the website to function and is used specifically to collect user personal data via analytics, ads, other embedded contents are termed as non-necessary cookies. It is mandatory to procure user consent prior to running these cookies on your website.
SAVE & ACCEPT