The group seemed to benefit from the somewhat stable operating environment experienced in the first half of the financial year. The contribution of monetary gains to the bottom line suggests the remittance services are becoming quite important to the operation. The consistency in the operating margins suggests the group is effectively managing the inflationary operating environment in one way or another. Anticipating the trend to continue, the approach taken by the authorities to control rising food prices will be a major concern for OKZim. The impact of rising interest rates on the group should be moderate, with no long-term liabilities and short-term payables relatively low. In the event of more “price control” oriented measures, the group’s operations will most certainly face some disruptions. 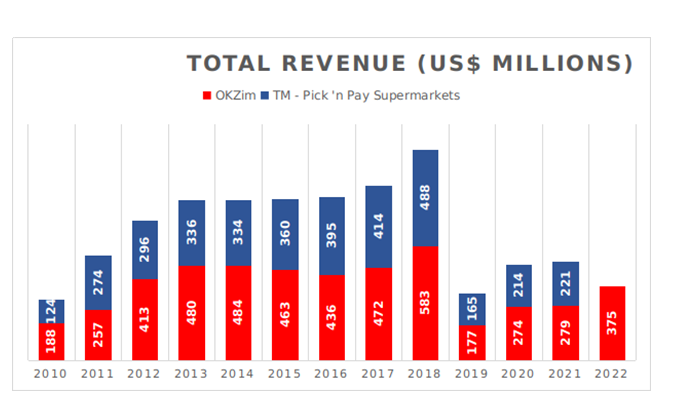 Narrowing the commentary a bit, OKZim has identified competition from existing operators, new entrants, and informal retailers as a significant threat. TM-Pick ‘n Pay Supermarkets are OKZim’s most recognizable competition in the retail sector. Analyzing the combined revenue figures suggests both operators have been struggling for a while to find sustained growth in the market. In that time, the distribution of the sales between the two retailers has been fairly stable. On average, between 2011 and 2021 OKZim took up 55% per year of combined annual sales. The situation seems to call for a more aggressive approach from OKZim towards the competition. This aligns with the recent management change, with a marketing specialist and business strategist Mr. P. Karombo taking over the CEO role from Chartered Accountant Mr. A. Siyavora. Beyond refurbishing stores, expectations will be for the group to add to its portfolio of services to compliment the main retail operations. The group will also be expected to invest in improving internal efficiencies to defend/improve operating margins. 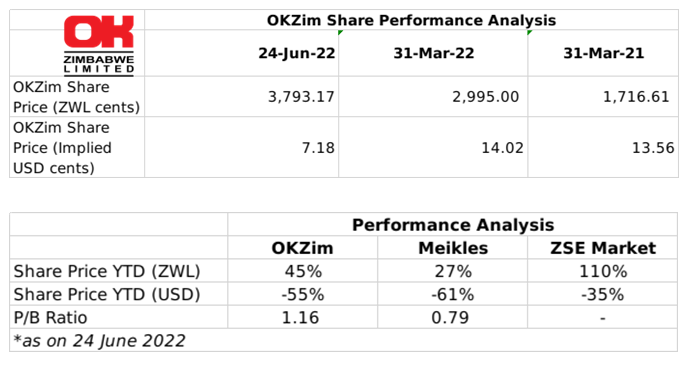 In YTD terms, the OKZim share has gained 45% in nominal value and lost 55% value in implied USD terms. By comparison, the share has outperformed industry peer Meikles which has gained 27% in nominal terms and lost 61% in implied USD terms. However the OKZim share has underperformed relative to the market. Looking ahead, there could be some upside to the share if the sentiment shifts towards safety given its liquidity and the stature of OKZim – Harare

By ETimes Econet, the country’s biggest telecommunication firm, says gains which have been recorded in the year ended 28...
Read more

This website uses cookies to improve your experience while you navigate through the website. Out of these cookies, the cookies that are categorized as necessary are stored on your browser as they are essential for the working of basic functionalities of the website. We also use third-party cookies that help us analyze and understand how you use this website. These cookies will be stored in your browser only with your consent. You also have the option to opt-out of these cookies. But opting out of some of these cookies may have an effect on your browsing experience.
Necessary Always Enabled
Necessary cookies are absolutely essential for the website to function properly. This category only includes cookies that ensures basic functionalities and security features of the website. These cookies do not store any personal information.
Non-necessary
Any cookies that may not be particularly necessary for the website to function and is used specifically to collect user personal data via analytics, ads, other embedded contents are termed as non-necessary cookies. It is mandatory to procure user consent prior to running these cookies on your website.
SAVE & ACCEPT