Players in the mining sector are losing up to 20% of their production potential owing to power shortages, latest data shows.

Currently, the mining sector makes up 73% of foreign direct investment, 83% of exports, 19% of government revenue, 2% of direct formal employment, and 11% of the country’s gross domestic product (DGP and GNI).

Zimbabwe’s installed electricity generating capacity is about 2 210 MW, of which 1 050 MW is from the Kariba South hydro power station and the balance is derived from several coal-fired power stations, the largest of which is Hwange, with an installed capacity of 920 MW.

In recent years, Zimbabwe’s actual generating capacity has been lower than the installed capacity due to low water levels at Kariba and lack of maintenance at the power stations.

The government’s initiative to revive idle mines also increased demand for electricity from the mining sector. Despite the use of imported power, the availability of electricity in Zimbabwe has been subject to load-shedding.

According to the latest State of the Mining Industry report released by the Chamber of Mines of Zimbabwe, almost all respondents were suffering unplanned power outages, with almost 60% of respondents reporting outages lasting up to six hours per day on average. 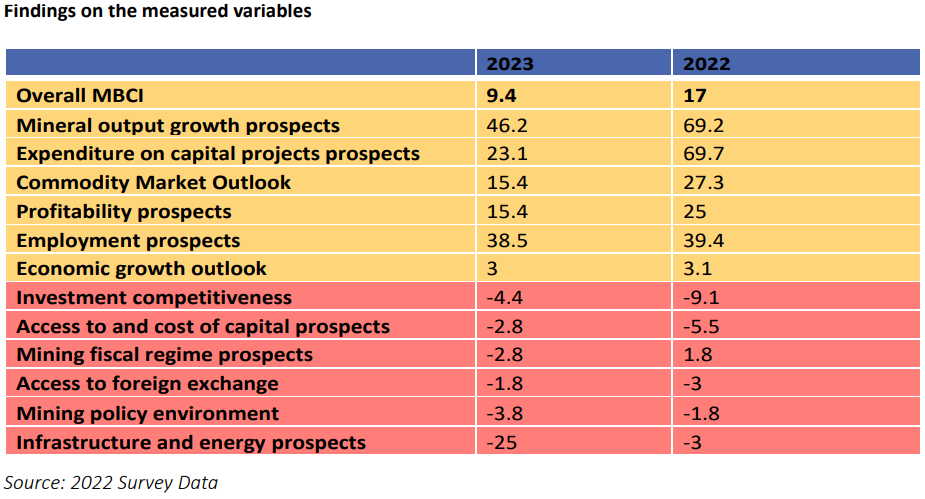 The majority (28%) of respondents reported outages lasting up to 12 hours a day, while the remaining (12%) said disruptions lasted longer.

“The power outages were also affecting those connected to dedicated power lines,” reads the report.

About 69% of survey respondents indicated that they are connected to dedicated power lines.

“Of these, almost all reported experiencing unscheduled power outages.”

Load-shedding and outages arising from an unstable supply have economic and safety implications for a mine.

According to survey results, the majority of mining executives (86%) believe that the mining industry’s infrastructure and energy situation will worsen or remain depressed in 2023.

Miners have therefore installed standby diesel generators to enable uninterrupted mining and processing operations, as well as work on capital projects, to continue during any disruptions to the grid supply.

“About 18% indicated that they are planning to invest in solar projects to supplement their power requirements. Almost all respondents reported that the cost of running diesel-powered generators is high, propping up the overall cost of production in the mining industry.”

Mining executives raised concern about the increase in the electricity tariff to about USc12.21/ kWh.

“Analysis of survey data shows that the proportion of electricity cost to total cost of production will increase by an average 42%,” stated the report.

“Mining executives indicated that the increase in electricity cost will consume on average 20% of mining companies’ stay in business capital budget which are largely funded from retained earnings.”

According to survey results, 2023’s profitability prospects are less favorable than those for 2022. The majority of executives stated that the predicted high cost structure brought on by the rise in energy prices, royalties, and taxes will have a negative impact on company profitability – Harare