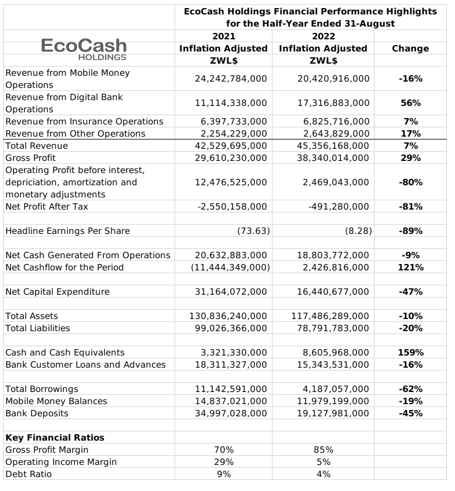 Listed fintech group EcoCash Holdings announced a ZWL$2.6 billion after tax loss for its half-year ended 31 August 2022, down 81% from the 2021 inflation adjusted comparative. Operating income before interest, depreciation, amortization and monetary adjustments declined by 80% to ZWL$2.5 billion while gross profit increased by 29% to ZWL$38.4 billion.

The growth in digital banking revenue was attributed to rising forex revenues resulting from an increased USD lending and foreign currency accounts. According to the group, a revamp in the Know-Your-Customer iSave accounts resulted in 234,000 new customer account openings during the perioDuring the period, the group’s operations generated a net cash flow of ZWL$18.8 billion and it’s net capital expenditures stood at ZWL$16.4 billion.

The Digital Bank was the group’s most profitable operating segment, with inflation adjusted growth of 323% to ZWL$5.7 billion. In contrast, the mobile money and insurance segments both made a loss of ZWL$4.9 billion. The group’s other operating segments returned a profit of ZWL$5.4 billion.

Going forward the group expects to continue its digitization strategy, and will continue to develop its life and short-term insurance products.

The group did not declare a dividend.

It’s fair to call it a subdued set of results from one of the country’s foremost companies. The ZWL$10 billion incurred under other expenses contributed materially to the depressed performance. It was a 1554% inflation adjusted increase from the 2021 comparative, and the nature of the expense was not elaborated in the financial statement commentary. That aside, the performance of the mobile money unit also stood out. Beyond the general global trend towards mobile transactions, it is arguable that Zimbabwe’ systemic economic issues have also played a major role in the rise of EcoCash – from the onset of cash shortages experienced in the middle of the last decade, to the rise of the informal foreign exchange market. It follows that the government’s current policies to reign in liquidity and parallel market activity have had an adverse impact on the operation. As seen in the results, mobile money revenues and customer balances have declined in inflation adjusted terms. Recent efforts to attract USD transactions are noted, but the punitive transaction charges and taxes are likely to limit customer interest.

The situation puts EcoCash Holdings’ other operations into sharper focus, with Steward Bank effectively carrying the group in the half-year. Still, the inflation adjusted declines in customer deposits and loans suggest the banking operation also taking a hit from the tight monetary policy. The decline in customer loans and deposits makes the 56% growth in the bank’s revenue somewhat curious. The mismatch probably underlines Steward Bank’s focus as a transactional banking operation, relying on transitional customer funds. The current macroeconomic settings could be a sign to expand the banking product and service offerings, and establish stronger linkages to key economic sectors. The latter seems to be a key factor in attracting foreign credit lines – which is increasingly important in the local banking sector.

The current monetary policy environment could arguably be characterized as “transitional” in nature. So, looking ahead, EcoCash Holdings’ prospects depend to a large extent on how the transition plays out. A progressive transition monetary environment with a stable domestic currency and convenient access to cash would likely require EcoCash Holdings to sweat a bit more for short-term growth. A regressive transition back to less restricted liquidity and high parallel market activity stands to benefit EcoCash Holdings again – although the current government policy regime would limit the extent. Both scenarios are consistent with a closing window for fast and easy growth for the group’s core mobile money and transaction banking operations. In that sense, there is a danger of an extended plateau for the group without more development in its non-mobile money operations.